All For A Floor

Today the first real project in the house began. Let's begin with the true "before" picture: 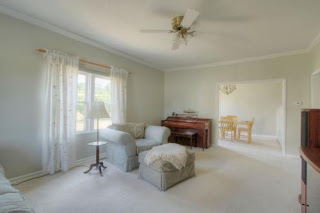 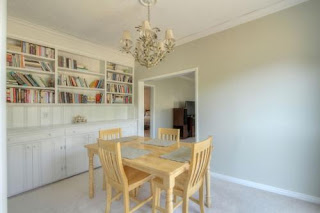 The dining room (also not my furnishings, but what a great built in!)

So, it's nice right? It is. But...of course I can't be satisfied with things like they are! I have always dreamed of having wood floors in my home (also, a fireplace, but that's a far future project!). Plus, I think this carpet is WAY too light for a high traffic area like a living room and dining room that leads into the kitchen. I would never keep it clean, and it had a few stains already.

I decided my first project would be to pull up the carpet and see what was hiding  underneath. Since this part of the house was originally built in the 1800s, I figured it was a good bet that there would be hardwoods underneath. However, it was risky, since the house was actually moved in the 1960s from across the street, so I could have found a mess.

What I found instead... 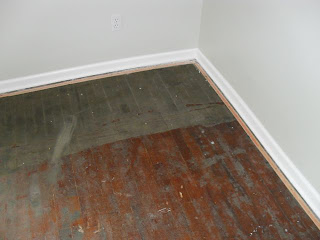 That would be some nice floors with a LOT of old adhesive stuck to it.

Who put tile over these gorgeous floors in the past? Some choices will always baffle me. So, they're not perfect and it's gonna take a decent amount of work. I spent most of the day scraping.

But my first problem was tackling getting the utility knife package open. 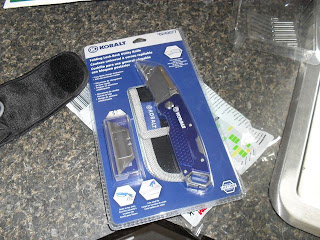 Does anyone see the irony in being unable to open a knife package because you DON'T HAVE A KNIFE??

By the end of the day I'd made a little progress, though you couldn't tell too much. Tomorrow, back at it with the help of a friend and his dad's tools! My dreams of getting up new paint may go by the wayside as I try to get this floor done before I move in my furniture! 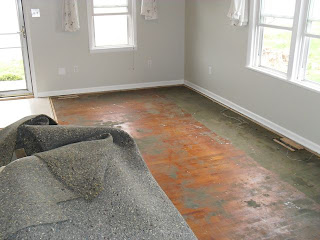